Imagine that by year 2050, the world’s population would rise to 10 billion and feeding the population means increasing global food production by 70%.

According to ESA, the agritech sector is a $5 trillion global business and is anticipated to grow.  Around 38% of the world’s land and 70% of the world’s water is used for agriculture and it is predicted that by 2030, 40% of water demands are unlikely to be met and hence the need for innovation and technology is needed.

The sense of urgency therefore for going digital with agriculture is clear and according to a 2016 study from the US Department of Agriculture, tractors guided by Global Positioning System (GPS) are used on 50% of corn and soybean acreage in the US Yield mapping.

Satellite data could be used to predict environmental factors which allow farms and producers to make more accurate predictions on future conditions.  Such information on general agriculture trends could also be collated to help predict commodity and insurance premiums.

Two trends appeared during our research of the trends in agtech. 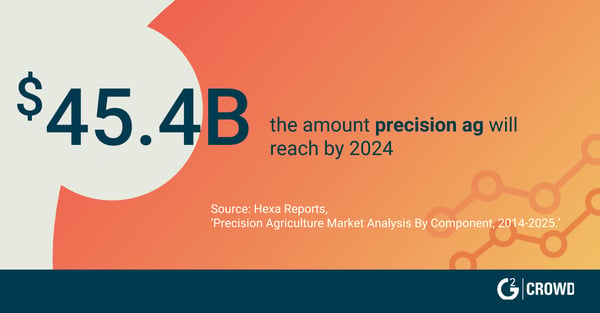 In Europe, there are close to 11 million farms of which 96% are classified as family farms.  Satellite data could help farmers act immediately on issues like irrigation and fertilisation, whilst Global Navigation Satellite Systems (GNSS) technology allow for easy navigation on points of interest.

Potential uses of space data in the agritech sector

Water conservation is important and earth orbiting satellites can help show where water needs to be distributed to prevent over-irrigation.  Such technology could aid in conserving potentially 18%-30% of a farm’s water supply.

With the assistance of Earth orbiting satellites, farmers could more accurate assess which specific fields require more fertiliser.  GNSS could aid in the reduction of costs and lessen the impact of over-fertilisation.  Moreover, drones could also be utilised in coordination with problems highlighted by GNSS.

Through use of satellite imagery, farmers could more accurately calculate the optimal route and navigation through fields.  This could be an opportunity for use of autonomous vehicles including tractors and harvesters on larger industrial farms.

Unpredictable weather conditions, and particularly due to recent impact of climate change can have a significant impact on crops.  With the assistance of satellite data, farmers can receive suggestions on which crops to grow, and these can be based on medium to long term weather forecasts.

Example include winegrowers.  They are highend producers who utilise precision agriculture to do yield mapping, down to 2 metre blocks and add data on everything from soil acidity clay to water retention to yield.  Such data is made possible by GPS in which they could then yield data to pruning, watering and harvesting.

This combined with satellite imagery is important as infrared sensors in space produce data that can be analysed to produce a Normalised Difference Vegetation Index (NDVI) which accurately measures the amount of leaf area in a block.

Other fields of application include:

There is a challenge however, and that is this kind of technology requires investment and bandwidth.

According to Microsoft, 23 million people in rural areas lack broadband internet access in the U.S, whilst in Europe 21 % of rural populations have no access to internet in 2017 and the figures in growing nations are more stark: 69 million in Brazil, 378 million in China and 725 million in India.

The market for precision farming technology is estimated to be worth $5.09 billion in 2018 and headed for $9.53 billion in 2023, growing at 13.4 % compound Annual Growth Rate (CAGR).  It is anticipated that satellite enabled technology is likely to revolutionise the agriculture sector and in Europe, the integration of GNSS navigation services into this market is forecasted to reach around 35% by 2020, equating around 500,000 sales.

What are your thoughts on agritech and space applications?

What makes a successful NewSpace entrepreneur?